Blog
You are here: Home1 / Blog2 / Blog3 / Purpose of a Naming Ceremony

A naming ceremony is not a legal ceremony and is not usually religious. It is performed by celebrants in Sydney. It is a ceremony of love and gratitude for the new addition to your family and celebrates the miracle of life, birth, love, and cherished.

What Happens at a Naming Ceremony?

Naming ceremonies are usually in the form of a party, with a cake, refreshments, music, decorations, and themes. Sydney celebrants, or celebrants in your local area, perform an official naming service for your baby.The service is usually fun, cute, and creative.

Creative rituals are often performed.Rituals are only limited by your imagination and can include lighting a candle, reciting a poem, telling stories about your baby and their life so far, paintings, great photograph displays, and much more.

As your naming ceremony celebrant in Sydney Jan performs a celebratory service where she talks lovingly of your baby’s new life and their coming into the world. Parents can have as much or as little input into the celebrant’s speech as they wish.

Often grandparents are involved in the ceremony, and close friends or family members may be named life guardians at this special occasion.

A naming ceremony is done by naming ceremony celebrants in Sydney, and can often be the same celebrant who married you. As a celebrant, Jan is personable, fun, bubbly and friendly. She has a great sense of humor and delights in performing ceremonies for all occasions. 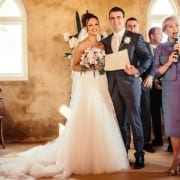 What does a wedding celebrant do?